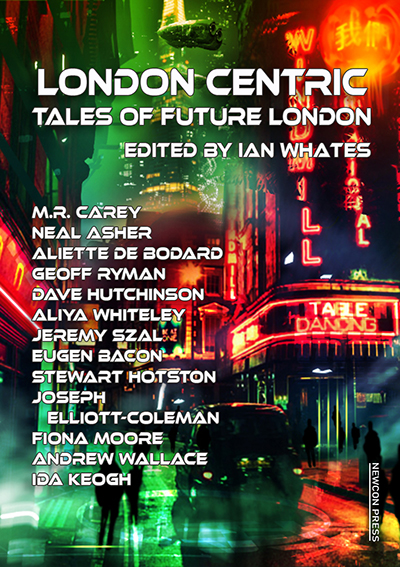 I don’t have much time for short fiction lately. But in the Before Times, in mid 2019, me and Ian Whates spoke about me contributing a short story to an anthology about future London he was putting together. That story ended up being not so short, at 13,000 words (my longest published piece of short fiction). But now, it’s out in the world, and I’m sharing some fine company.

Militant A.I.s, virtual realities, augmented realities and alternative realities; a city where murderers stalk the streets, where drug lords rule the shadows, and where large sections of the population are locked in time stasis, but where tea is still sipped in cafés on the corner and the past still resonates with the future…
Neal Asher opens the anthology with a story set in his Polity Universe, Dave Hutchinson gives us a novelette from his Fractured Universe milieu, Jeremy Szal takes us to the world of his debut novel Stormblood, M.R. Carey, Aliette de Bodard, Geoff Ryman, Aliya Whiteley and a cast of equally talented writers transport us to Londons near and far…

Available as an A5 paperback and a numbered limited edition hardback signed by all the contributing authors.

And just as the description notes, this short story takes place in the world of STORMBLOOD, making it my first published prequel to the novel. It was a great chance to try something different and experiment with a different PoV and style. Here, the prose is deliberately a little more baroque and is marginally more purple than I’d usually write if I was still wearing Vakov Fukasawa’s skin.

It doesn’t have any of the same characters as those who appear in STORMBLOOD, and the adventure takes place in London as opposed to a megacity asteroid, but it’s definitely connected to the novel, although it can be read as a standalone. If you haven’t read STORMBLOOD, there are a few spoilers in the story you may want to watch out for.

So if all that sounds cool to you, you’re welcome to grab it online at the publisher’s website (or any other retailer of your choice). Hope you enjoy!