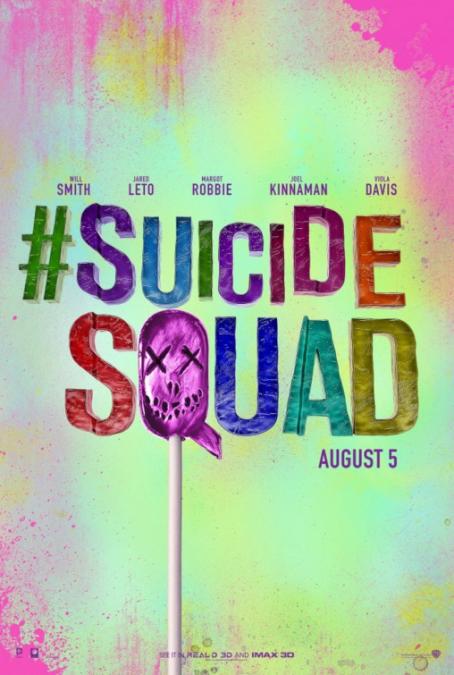 So. I just got back from a preview screening of Suicide Squad here in Sydney. My smart smart sister managed to procure two tickets to the event through a competition. And we went. Not only did you get a free shot of whiskey, every single seat was supplied with a mega-sized box of popcorn and a drink. They also gave away an Xbox One for best cosplay, but sadly we didn’t win it.

(ETA: Since some folks over on Reddit and Neogaf (thanks for linking guys!) are concerned about spoilers, I’ll say there that this review is spoiler free. You may read without peril).

Oh, how was the film?

It was pretty damned amazing.

It’s easily one of the best superhero films around. It’s the absolute epiphany of grunge, the alt-punk aesthetic dripping from every frame. It leans towards the unconventional and stylistic, especially towards the beginning where all the characters are introduced to use by way of a montage. It’s bursting with psychedelic colours; it’s in your face and down your throat and it’s proud of it. As much as I love the gritty urban realism of Nolan’s rendition of Batman, it’s a breath of fresh air to see the zaniness leaping off the screen.

That isn’t to say that it isn’t intense or dark or visceral; it’s all of those things and more. It pushes the “PG-13” rating to the limit and then some (some day I’ll actually be able to process US-ian rating systems – or anything the US says or does – through my Aussie brain). The action is razor-sharp and just as wild and insane as you’d expect, although sometimes it’s so chaotic that untangling the cacophony makes your head hurt.

But it’s not the straight-forward story, by-the-by scenario, or even the (somewhat lackluster villain) that makes the film inciting: it’s the characters. They’re constantly hurling razor-sharp remarks, deflecting the verbal blows and bouncing it right back. There’s a chemistry here that can only be compared to magnets: opposites attracting in the most warped of ways. These guys are insane and they know it. And they don’t care. They relish it.

At least half of the cast has a compelling personal history and/or demons looming over them that drive their motivations – if they don’t constantly pop up through the film they loop around by the end. Make no mistake: this is about as character-driven as a superhero film as ever been. In all other Marvel and DC films the camera is distant and detached, more interested in the space around the characters than themselves. The opposite is true here: we get treated to close ups and medium close ups of the entire cast, peeling back their layers and their histories and motivations. The camera cares about these people and their attachment as a group, as by extensions so do we. There’s a point around 3/5s through the film that I was waiting for, when their relationships all started to cement, their personalities evolving. There’s one incredible extreme close up at the film’s climax that sent shivers down my spine, the relationships and banter and collective charisma building up right until this point and executing it flawlessly. Easily some of the most fleshed around characters that any superhero film has ever offered up. The highlights were Deadshot and (of course) Harley Quinn, but I would have loved more backstory on Killer Croc and Captain Boomerang, although we did learn one of them has a fetish for pink unicorns. Have a guess which one.

The film isn’t without it’s solid flaws. Leto as the Joker was underwhelming, particularly with the character being given minimum screen time. The film also went through re-shoots and they stick out like a sore thumb if you’re looking hard enough. The pacing is somewhat inconsistent, and to say that the villain is meh is an understatement. Leto’s Joker doesn’t hold a candle to that of Ledger (RIP), but we all knew that from the start.

But these are small flaws in what’s certainly one of the better superhero films to grace our screens. The characters are a sadistic joy to watch in all their gory train-wreck glory, the action is solid and the dialogue top notch. Highly recommended.

ETA: Whoa, 25,000 views in less than twenty hours. You guys are amazing and I love you all for reading my rambling, incoherent mess that is somehow a review everyone wants to read. If you liked the review please do check out my other published short fiction (mostly science-fiction) and critical reviews, all catalogued over here on this page under “Bibliography”, it’s all free to read, and it perpetuates my fantasy of being a writer/critic. So if you checked that out it would be awesome. PS: I also co-edit a podcast.

Feel free to leave your responses in the comments. I seem to be getting a lot about Leto’s Joker. By all means, keep ’em coming (and thanks again for reading, it means a lot to me!)